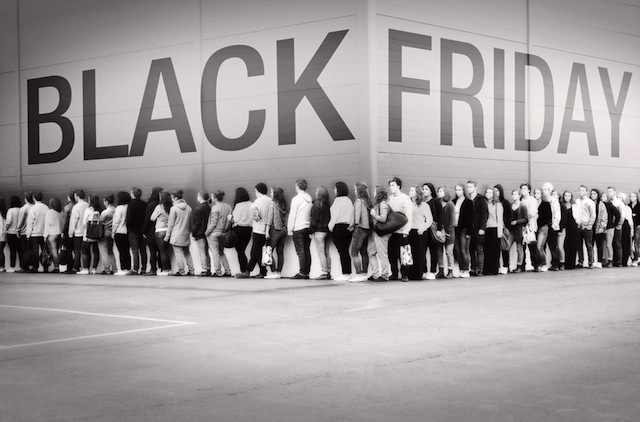 Every year, retailers figuratively place their bets and lick their chomps, waiting for the Superbowl season of retail:

Over the years (and thanks to the Internet) that crazy one-day event has turned into a melding of events collectively folded into an entire Black Friday weekend.

And every year, retailers obsessively check their “scores” in order to learn if all of the Q3 preparedness, planning, and madness was worth it.

More to the point, retailers use the data they’ve collected after Black Friday weekend to learn how much they’re loved, where they’re making the grade with consumers, and where their sales and marketing weak spots are.

Here’s a brief look at how ecommerce retailers scored this year:

Online Shopping For The Win!

There were plenty of opportunities for online shoppers score irresistible shopping deals, and shoppers responded in kind.

Cyber Monday reached $2.28 billion in desktop online spending, up 12 percent versus year ago, representing the heaviest online spending day in history and the first day of the 2015 season to surpass $2 billion in sales.

The weekend after Thanksgiving also reached a major milestone as it saw its first ever billion-dollar online shopping day on Sunday, while Saturday sales reached the $1 billion mark for second year in a row.

The two days combined posted particularly strong growth online, raking in $2.169 billion for an increase of 8 percent compared to the same weekend last year. For the five-day period from Thanksgiving through Cyber Monday, online buying from desktop computers totaled $7.201 billion, up 10 percent versus last year.

Thanksgiving Shopping Proved Not to be a Turkey

There used to be a time not too long ago when the thought of shopping on Thanksgiving was perceived as downright sacrilegious. But in response to more practical shopping and lifestyle habits, more retailers dipped their toes into offering shopping opportunities on Thanksgiving.

The trend was said to take a strong hold during the Thanksgiving shopping weekend of 2014 and this year, Thanksgiving boldly kicked-off the Black Friday shopping weekend. Shoppers were able to take advantage of offline and online shopping deals, but due to incentives such as codes and targeted online advertising, most of the consumer bounty was found online.

Adobe reported on the trend, stating,

In fact, it’s widely reported that online retailers beat the stuffing out brick and mortar retailers when it came to overall revenue generation.

Also, last year brick-and-mortar retailers found that Thanksgiving Day sales occurred at the expense of those on Black Friday.

Estimates state that up to half of ecommerce site traffic was generated from mobile device shoppers. However, there’s many retailers who haven’t properly facilitated mobile shopping capabilities, accounting for a weak 2 percent conversion rate.

The first two days of the holiday sales period have netted $4.45 billion in U.S. online purchases, with mobile devices — led by smartphones — accounting for a record $1.5 billion of that amount, with $2.72 billion spent on BlackFriday and $1.73 billion on Thanksgiving.

The figures come from Adobe, which has been tracking some 4,500 sites, including 80% of the top 100 retailers.

Black Friday outpaced that with the average basket size of $134.45, and sales up 20.7% on a year ago with popular items including Apple Watch, Microsoft’s Surface Pro 4, and TVs from Samsung, Sony and LG…

Thanksgiving online sales — amassed by way of its Benchmark survey tracking thousands of sites — overall were up 26% compared to a year ago. But the average spend per order on Thursday as $123.45. That’s down from $125.25 a year ago, and nearly $10 less than 2013, when the average basket value was $132.

Amazon ranked as the most visited online retail property on Cyber Monday, followed by Walmart, eBay, Target and Best Buy.

Retailers are still in the thick of their playbook for 2015, so it may seem crazy to start considering Q4 2016. However, forward-thinking, agile brands will definitely make sure to facilitate all online channels of shopping, and if they’re lagging behind on the mobile front, then they have all the data they need to justify plugging these holes – immediately.

Thanksgiving Day shopping will only scale forward as a trend, and online shopping will continue to dominate as the option of choice for shoppers in the years to come. Make the most of the data from this holiday season to plan not only the 2016 holiday season, but also your marketing and distribution plans for next year on the whole.