Posted on November 9, 2012 by Patrick Speijers in Customer Service with 0 Comments 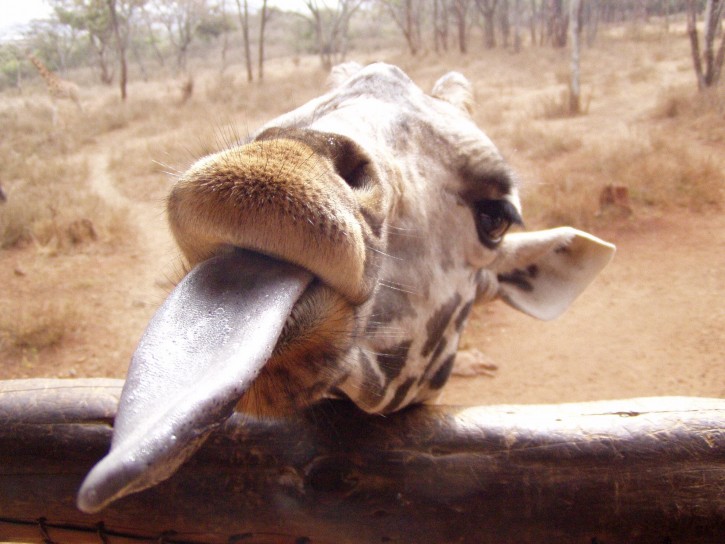 Customer service – truly great customer service – can really change the way people look at your company, or at your brand. We’ve put together a few stories here that show what a little bit of social media fueled personal attention can do, and that anyone can do them if they just pay attention to their customers.

1. The Ritz Carlton gives a stuffed giraffe the time of his life

Chris Hurn’s family came for a stay at the Ritz Carlton. When they got home, they discovered that they forgot the son’s favourite stuffed giraffe – Joshie. Chris, being an inventive father, calmed his son down be explaining that Joshie had just extended his holiday a bit more.

That night, the hotel called to say they had found the giraffe. Chris asked them to take a photograph of Joshie lounging in a chair, with perhaps a pair of sunglasses, so that he could show his son that he had been telling the truth. He was told ‘no problem’, and that was that.

The Hurn family got Joshie back a few days later via mail, and found that the stuffed giraffe had a lot more fun than they had – he was photographed at the spa, hanging out with friends, even driving a golf cart. And he had his own Ritz-Carlton ID badge.

Needless to say, the Ritz-Carlton got plenty of good PR out of this great customer service which was shared far and wide on social media.

2. Hungry, and in the mood for steak? Just Tweet @mortons!

Peter Shankman was hungry on the last leg of many flights. He Tweeted (as a joke):

‘Hey, @Mortons – can you meet me at newark airport with a porterhouse when I land in two hours? K, thanks. :)’

He landed two and a half hours later, to collect his steak, which was brought to him at the airport by special delivery, along with shrimps, potatoes, and silverware.

In the time that he flew two hours and change, someone at Morton’s picked up the Tweet, asked for approval for the idea to actually deliver the food, the food had to be cooked and driven to the airport over 20 miles away from the nearest Morton’s, and of course, they had to track down Peter Shankman’s flight number and when and where he was landing (which I imagine led to some fun conversations with flight personnel).

Shane Bennett, a 26 year old from Canada, posted a request on Samsung Canada’s Facebook page. As you can see, he included a drawing of a dragon, in hopes that it will help him secure the Galaxy S3. 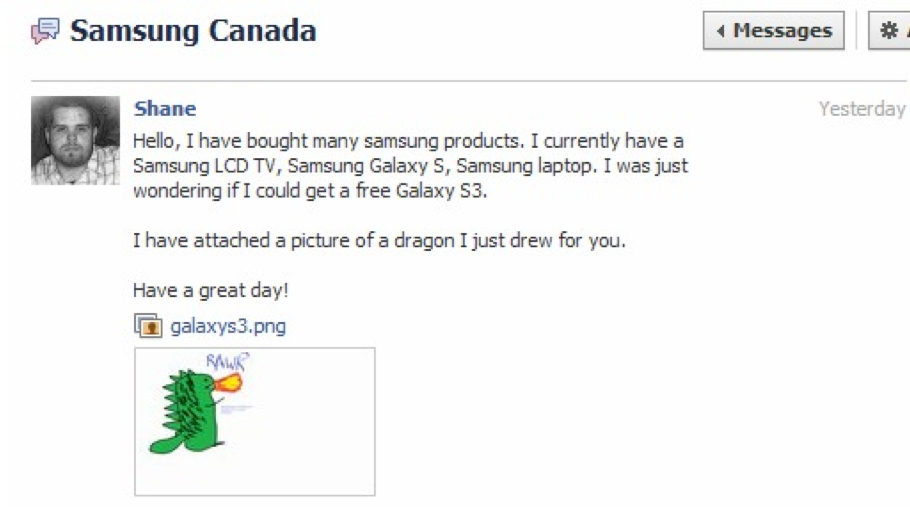 Needless to say, the answer was ‘No’ – but it was a funny ‘No’, and Samsung’s social media customer service manager even included a picture of a kangaroo on a unicycle.

Shane Bennett shared his original message and their response on Reddit, and it went super viral, to the surprise of all.

Samsung’s answer was no, but when the dragon went viral, they sent the guy a personalized phone! With his dragon! So their answer was a yes in the end. Shane Bennett ended up with the only personalized Galaxy S3 in canada, which is a great way to start conversations! 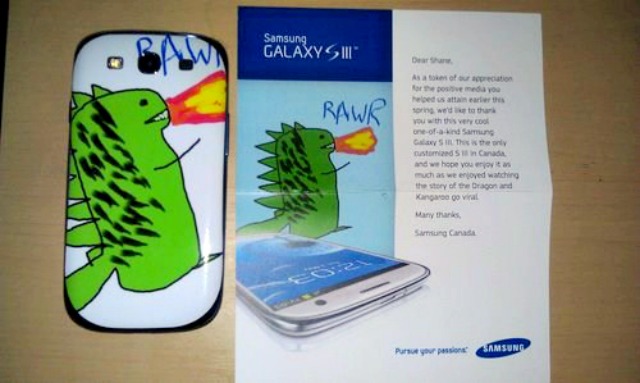 “Dear Shane, As a token of our appreciation for the positive media you helped us attain earlier this spring, we’d like to thank you with this very cool one-of-a-kind Samsung Galaxy S III. This is the only customized S III in Canada, and we hope you enjoy it as much as we enjoyed watching the story of the Dragon and the Kangaroo go viral. Many thanks, Samsung Canada”

When customer service takes the spotlight, your brand wins.

Patrick Speijers (1974) is co-founder and CEO of Robin, the social and web customer service app for online retailers. Robin is a multi channel customer service app, supporting communication through online contact form, e-mail and twitter. It has a handcrafted, beautifully designed, powerfull GUI for external communication, internal collaboration supported by an adaptive customerpanel. Robin works on desktop, tablet and mobile and has native apps for iPhone and iPad. For a special ecommerceinsiders deal, please send me an e-mail.